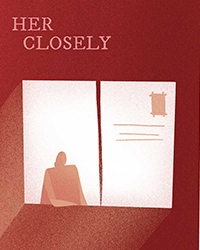 × In 1955, Felice walks a large volume of letters to the train station in Rye, NY. In the last years of her life, parting with them seems her most valuable lifeline. Felice in 1912, a Berlin typist-become-sales-executive, keeps to a state of constant motion and supports her family household. Then while visiting a cousin in Prague, she encounters a law clerk craving the life of a successful writer. Weeks later, he abruptly initiates a connection with her through the mail - it might be one of musing and hope for a settled life, it might fuel an inferno of inner-turmoil and validation-seeking. A move to America and decades later, Felice’s side of the dialogue destroyed, can she be witnessed in the release of Franz Kafka’s letters? Or does letting go cast her in greater shadow?